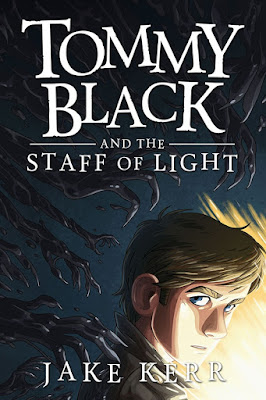 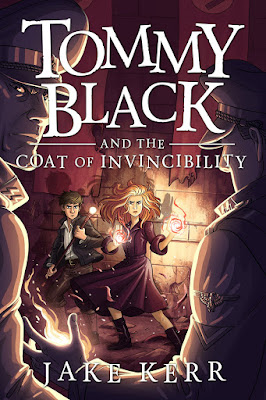 ABOUT BOOK 1:
For fourteen-year-old Tommy Black, nothing is worse than being raised by an overprotective grandfather in the city that never sleeps. That is until his grandfather is captured by magical creatures and Tommy has to save him with his family's magical staff.
That wouldn't be so bad, but the only magic he can do with the staff is weak--making light. What the heck can you do with light?
Tommy finds out as he fights golems, shadow creatures, and djinn in a journey that features a magical river, an enchanted train, and an illusionary fortress. But the worst part of all? Tommy has to save his grandfather with the help of Naomi, a girl whose talent with magic is only rivaled by her ability to hurl insults.
In this novel full of action and adventure, Tommy Black continues the tradition of young heroes finding their place in a formerly unknown magical world. Like Harry Potter, Tommy has a magical legacy thrust upon him from out of nowhere. He must not only understand this responsibility but the forces that are suddenly arrayed against him. Like Percy Jackson, mythology is plays a central role. And like both heroes, one of Tommy's best friends is a strong independent girl, who is a valuable ally while being headstrong and often difficult.
From Nebula, Sturgeon, and Million Writers Award nominee Jake Kerr comes the Tommy Black trilogy, an action adventure series for boys, girls, and readers of all ages.

ABOUT BOOK 2:
In this widely anticipated second volume of the Tommy Black series, Tommy finds himself searching for magical artifacts and fighting Nazi magicians in World War 2 Europe.
Dedicated to reshaping his family's legacy, Tommy Black has spent two years mastering the powerful Staff of Light and freeing the magical creatures in England. While he was focusing on his personal mission, however, Germany had invaded Europe, igniting the flames of world war.
Desiring to help, Tommy volunteers to free the magical creatures in Germany to disrupt the Nazi war machine. Joined by his friend, the powerful magician Naomi, and two others, the group soon discover an extraordinary secret that changes everything--Tommy may not be the only Archmage in the world. 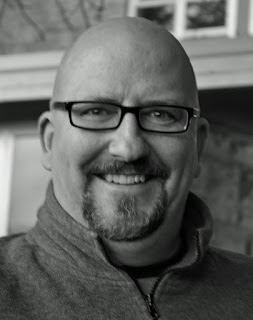 Receive a free book of Jake's short stories by joining his mailing list here: http://bit.ly/1xNOs1o
After fifteen years as a music industry journalist Jake Kerr's first published story, "The Old Equations," was nominated for the Nebula Award from the Science Fiction Writers of America and was shortlisted for the Theodore Sturgeon and StorySouth Million Writers awards. His stories have subsequently been published in magazines across the world, broadcast in multiple podcasts, and been published in multiple anthologies and year's best collections.
A graduate of Kenyon College, Kerr studied fiction under Ursula K. Le Guin and Peruvian playwright Alonso Alegria. He lives in Dallas, Texas, with his wife and three daughters.

HI JAKE! THANKS FOR BEING HERE TODAY. TELL US A LITTLE ABOUT YOURSELF AND YOUR BOOK.

I’m a former music journalist who turned to writing about ten years ago. I started out writing short fiction, where I have had some success with award nominations from the Science Fiction Writers of America and others. My stories have been translated in China, France, Poland, and elsewhere. In 2015, I released my first novel, the kids book Tommy Black and the Staff of Light. My current book is the second in the Tommy Black series—Tommy Black and the Coat of Invincibility.

YOU'VE BEEN EXTREMELY BUSY! WHEN AND HOW DID YOU BECOME A WRITER?
I’ve wanted to be a writer my whole life, and I actually got paid a salary to write for quite a few years as a journalist/columnist, but I’ve always loved day dreaming and reading amazing tales. So the draw of writing fiction was always there. But to my mind, I didn’t become a writer until I finished my first story, and that was a long journey of wishing to be a writer while not doing any writing at all. When I finally started to actually create stories on the page—that was when I became a writer.

WOW, THAT'S HUGE! WHAT IS THE HARDEST THING ABOUT BEING A WRITER?
How slow it goes. It is a real challenge for people with rich imaginations to start writing because your mind envisions the story and scene much faster than you can write it. So you need to purposefully slow down and not “dream ahead.” It’s harder than it sounds. After all, the story you are writing is exciting, and you are writing it because you love it. Even as you write you are a reader, and the desire to rush ahead is very strong. Resisting that is what I find hardest.

I AM ABSOLUTELY THE SAME WAY. WHAT ARE YOU WORKING ON AT THE MOMENT?
I am currently working on a re-imagining of G.K. Chesterton’s 1906 novel The Man Who Was Thursday. I’m taking Chesterton’s story and moving it to a virtual reality world in the near future. I decided to do it because I love the original, and this seemed like a lot of fun. After that I will be working on book five of my Guildmaster Thief Omnibus series.

DO YOU EVER SUFFER FROM WRITER’S BLOCK?  IF SO, HOW DO YOU GET PAST IT?
Not so much. More than anything I suffer from writer’s impatience. I have so many stories that I want to write.

DO YOU HAVE A FAVORITE PLACE TO WRITE?
I really don’t have a “favorite” place. I usually write on my laptop in bed, but it’s not a writer’s den or creative cocoon or anything like that. I guess I tend to write in practical locations—airplanes, hotel rooms, on my bed, in a coffee shop. Wherever I can type.

LAPTOP IN BED IS MY SPOT TOO. WHAT’S THE GREATEST COMPLIMENT YOU EVER RECEIVED FROM A READER?
A mother who had lost her child said that my story “The Old Equations” reminded her of her loss in a deeply touching way. It’s a story about love and loss, so the comment was very moving and meaningful to me. That’s what you want to do as a writer—touch a reader in a way that resonates with them.

WHAT WAS THE WORST COMMENT FROM A READER?
The same story that touched the mother who had lost her child was called “one of the worst science fiction stories I have ever read” by a fellow writer in the comments section of the online magazine that published it. You quickly learn that you can’t please everyone.

AIN'T THAT THE TRUTH! OTHER THAN WRITING, WHAT ELSE DO YOU LOVE?
I love watching my three daughters grow up. They fill me with such joy.

DID YOU HAVE YOUR BOOKS PROFESSIONALLY EDITED BEFORE PUBLICATION?
I’m lucky in that my wife is a formidable editor. So while she is not a professional, she is extremely good. In addition to her, I do use a second professional editor.

YOU LUCKED OUT WITH YOUR WIFE! GOOD EDITORS ARE HARD TO FIND. HOW DID YOUR BOOK COVER COME TO FRUITION?
M.S. Corley is my cover artist, and I noticed his work on a book from a friend of mine. My friend introduced us, and I paid him for Tommy Black and the Staff of Light, and it was so amazing I, of course, hired him to do the covers for the rest of the series.

I LOVE THE 2 OUT SO FAR. DO YOU SEE YOURSELF IN ANY OF YOUR CHARACTERS?
That’s a tough question. I guess I see my idealized self in some of my characters or at least pieces of myself. But I don’t consciously do that. It just kind of happens.

WHICH DO YOU PREFER – SELF PUBLISHING OR TRADITIONAL?
I enjoy the creative process in all its variations to traditionally publish in anything other then very specific circumstances. It would pain me not to be able to be involved in the cover or book design.

DOES THE PUBLISHING INDUSTRY FRUSTRATE YOU?
Not at all. I find it quite easy to navigate. Of course, I’m not dealing with publishers.

DID YOU EVER THINK OF QUITTING?
Never.

GOOD! HOW WOULD YOU DEFINE ‘SUCCESS’ AS A WRITER?
Another tough question. I guess success to me is really nothing more than having a lot of people share my daydreams by reading my books.

DO YOU HAVE ANY TIPS FOR NEW WRITERS?
Read widely. Even if you just love fantasy, read a lot of different genres, eras, and cultures. Stock your writers toolbox with as many tools as you can, and the only way to do that is to experience them.

ANYTHING YOU’D LIKE TO ADD?
I was blonde up until about the age of ten. So I like to think that I’m at home here.

LOL! YOU SURE ARE AT HOME HERE! I KNEW I LIKED YOU FOR A REASON.

PRETTY GOOD FOR AN ACTUAL BLONDE!

AND HERE'S WHERE YOU CAN FIND JAKE AND HIS BOOKS:

THANK YOU FOR JOINING THE BLONDE BOOKIE TODAY!
#tommyblack
#jakekerr