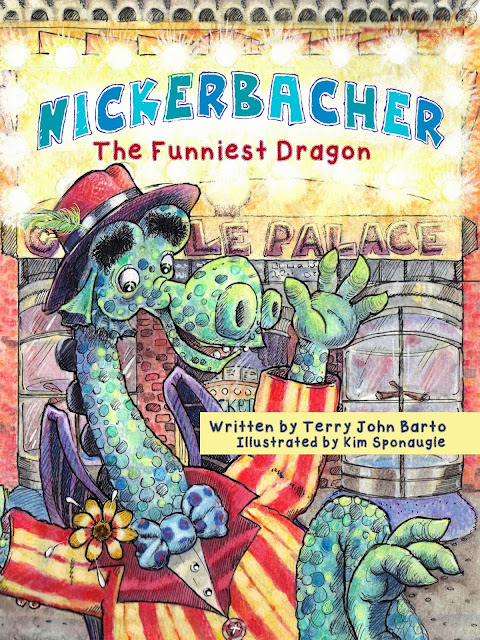 "Dragon" You Along On A Comical Tale!  Children's Book Celebrates Fulfilling Your Dreams.
A dragon named Nickerbacher guards a princess because his papa told him to. However, he practices his jokes on Princess Gwendolyn, as he yearns to be a stand-up comedian. The young dragon gets up the nerve to tell his papa about his dream and is sternly reminded of his dragonly duty. Later that day, Prince Happenstance arrives for the princess and repeatedly challenges the dragon to fight. The opponents manage to find common ground and Nickerbacher leaves for the big city to pursue his dream.
Nickerbacher is the only dragon who wants to make people laugh. And in the process, he encourages the prince (and kids) to be themselves and follow their dreams.
Nickerbacher, The Funniest Dragon is the winner of the Royal Dragonfly Book Award 1st place Picture Book 6 & older, National Parenting Publications Award, Family Review Center Best of the Year, Readers' Favorite International Book Award - Gold, IndieReader Approved, BlueInk Review's Best Books of 2015, Children's Literary Classics Seal of Approval, CIPA EVVY Gold Award.

FIRST, LET'S START WITH THE BOOK REVIEW:
MY BLONDE REVIEW:
I adored the message to go after your dreams, no matter how far out of the scope they may seem. And for a dragon who would rather fire up jokes rather than breathe fire at foes, I’d call that the furthest thing from the scope. The book also made it clear that even big bold creatures can be fearful to be their true self. And that it’s important to stand strong and be who you are inside. Sometimes what your parents want for you may not be your best and only option.

I think this can be enjoyed by both boys and girls alike. The book is clean and heartfelt. There is a warming feeling as Nickerbacher’s family (perhaps after some slight reluctance) is supportive of his dream. I also loved how Nickerbacher was joined in his freedom of dreaming with the prince he was supposed to fight. It proves that having dreams can be a universal language. In addition, since this was a picture book and I am coo-coo over fonts, I did enjoy the chosen font, colors, as well as found the art absolutely eye catching! I also loved the creative “Nickerbacher on Tour” sign at the end. My daughter giggled as I read them off to her!

And speaking of her: my 4 year-old daughter’s favorite parts were the pictures, the princess’s tower, and when Nickerbacher met his parents backstage at his show.

Overall, we had a blast reading this and I don’t think kids will be able to resist the strong message within!

AND NOW, FOR THE AUTHOR INTERVIEW. HERE'S ALL YOU NEED TO KNOW ABOUT TERRY JOHN BARTO: 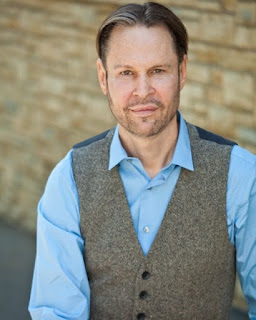 HOW DID YOU COME UP WITH THE IDEA FOR THE GREAT NAME
NICKERBACHER?
It just came to me after I thought up the overall idea. The part that took the longest was how to spell it. There’s the Knickerbocher Hotel and I knew I didn’t want it to start with a K, then the reason I went with bach for the 3rd syllable is a tribute to the classical composer.

YOUR CHARACTER LIKES TO DO STAND-UP COMEDY, DO YOU SHARE THAT
PASSION?
No, but I have some good friends who do stand-up. I come from a theatre background so the similarities are the stage aspect.

IF NOT, DID YOU PRACTICE ANY STAND-UP FOR RESEARCH PURPOSES FOR
THE BOOK? IF SO, HOW DID IT GO OVER? WHAT WAS YOUR BEST JOKE?
I went to see comedy shows but didn’t perform. The jokes in the story were hard to do and I put a ton of thought into them. I consulted my friends in the “business” and went back & forth with my editor before finalizing. Maybe some good jokes ended up on the cutting room floor. The last page has a list of places Nickerbacher goes to on tour. That was because we had so many neat names but only needed one for the actual story.

SO YOU’VE DONE TURKEYS AND DRAGONS, WHAT CAN WE EXPECT TO SEE
NEXT?
I’m working on a story about a surfer. I was raised in Huntington Beach, California, the surfing capital of the world, so it’s a bit more familiar.

DO YOU SEE YOURSELF IN ANY OF YOUR CHARACTERS?
The dreamer part is all me!

FROM THEATER AND TELEVISION PRODUCTIONS, WHEN AND HOW DID
YOU MAKE THE TRANSITION TO A WRITER?
An actress that I was directing in a show had some ideas for animation. She asked me to be Creative Director of the production company she was starting. I used my story telling abilities to help hone and develop her stories. After that, I used the experience I gained and started developing my own ideas.

WHEN YOU WERE THE CREATIVE FORCE BEHIND LIVE SHOWS, WERE YOU
ABLE TO TAKE CRUISE SHIPS AND WATCH THEM IN-PERSON?
Yes, I oversaw the first show I did for Princess Cruises, on the ship after rehearsing in a studio in Los Angeles. The show went on for 5 years on 2 ships whereas I didn’t see any of those productions.

CONGRATS ON ALL OF YOUR AWARDS FOR NICKERBACHER! AFTER
WINNING SO MANY, WHAT WOULD YOU SAY IS YOUR GREATEST WRITING
ACHIEVEMENT?
I’m really proud of all the recognition we’ve gotten. But I would say the Story Monster Award is the greatest ‘cause kids chose it. We got a perfect score for that award which apparently has never happened. Most recently, we got first place with Writer’s Digest for the e-book version, which is pretty cool too.

WHAT MADE YOU DECIDE TO PUBLISH WITH AUTHOR HOUSE? HAVE THEY
DONE A LOT FOR HELPING YOU MARKET THE BOOK?
Their connection with Penguin Random House. Yes, they helped but I did a lot of marketing myself.

HOW WERE YOUR ILLUSTRATORS CHOSEN FOR BOTH BOOKS?
My editor is a friend with Kim Sponaugle who I had watching for a while. I loved her versatility and it seemed to be a perfect fit for Nickerbacher.

For Gollywood, Here I Come! I was originally going to use someone I worked with at the Production Company where I was Creative Director. It turned out she couldn’t fit it into her schedule. I found Mattia Cerato through a recommendation of a friend who has an animation company. I guess my gut feeling was that he’d be perfect and I couldn’t be happier with the outcome.

THE ARTWORK IS INCREDIBLE IN THE STORY. HOW MUCH INPUT DID YOU
HAVE IN THE CREATIVE DIRECTION?
I had a lot of input with both stories but in different ways. Kim & I discussed each scenario at length and worked it out together before she started. Just the cover was a process that took more then a month. In one scene where Nickerbacher is practicing in his room, we wanted pictures of his comedy idols on the wall. Kim worked from actual headshots of my friends in the business.

With Mattia, I extensively laid out what each scenario should be. Since he was in Italy, I had to write everything out. I also sent him a book on Southern California in the 1950’s to give him a sense of the style I was looking for. And he came back with artwork that was above & beyond. With both books, there are first drafts and discussions on any changes needed. It was a huge process and very fun. These artists were a dream to work with.

YOUR BLOG IS FANTASTIC WITH THE TALL, TALL TOWER. SO MUCH FUN!
DID YOU PARTNER WITH THE SAME ARTIST FOR IT?
No, it was a template I found before we even started. I thought it would be good for what I had in mind.

THERE COULDN'T HAVE BEEN A BETTER TEMPLATE! YOUR CAREER
PORTFOLIO IS AN INSPIRATION! AMONG WRITING, DIRECTING,
CHOREOGRAPHING, FILM, ETC, WHICH CREATIVE OUTLET IS YOUR
FAVORITE?
Stage was a true love for me and I will always enjoy getting back to it. I had done so much of it that it was really nice to do something different.

I ALWAYS FIND THIS INTERESTING…DO YOU HAVE A FAVORITE PLACE TO
WRITE?
Not so much a favorite place but I loved having my dog at my side. I originally thought up Nickerbacher’s story in a car during a long ride. I finally had to pull off the freeway and write it down on an In & Out Burger bag. Then, of course, I spent a few years refining it.

OTHER THAN WRITING, I KNOW THAT YOU LIKE YOGA AND PILATES. IS
THERE ANYTHING ELSE YOU ENJOY IN YOUR SPARE TIME?
Being with my family and walking my dogs. I now have 2 dachshunds.

SINCE CLEARLY YOU ARE DOING THIS RIGHT, DO YOU HAVE ANY TIPS FOR
NEW WRITERS? J
Persistence and determination. It’s hard when rejection is involved, but stick with it. Because if you stop writing and putting yourself out there, it for sure won’t happen.

ANYTHING YOU’D LIKE TO ADD?
I’d just like to sincerely thank you for interviewing me and taking the time to review our
book.

Here's where you can find Terry: